Virginia M. Hunt (far left), Class of 1934, and two other Mount Holyoke students with a group of children from a settlement house in Holyoke, Mass., on a visit to the campus sponsored by the Social Service Committee of the college Y.W.C.A. 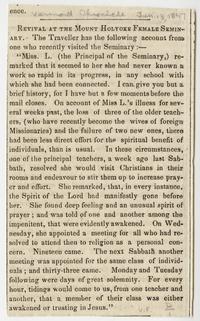 "Revival at the Mount Holyoke Female Seminary," article from the Vermont Chronicle

The YWCA records document the religious activities and social work of members of the organization from 1893-1935. Materials are arranged in five series: Constitutions, Lists of Members, Minutes, and Reports; Programs, Publications, Articles, and Announcements; Budgets, Scrapbooks; and Photographs. Constitutions, Lists of Members, Minutes, and Reports (1893-1935) comprise most of the collection. For most years, members of the YWCA compiled a Statistical Record consisting of membership lists, minutes, and reports. Other records were kept in notebooks or issued as printed publications. Constitutions outline the purpose and structure of the organization and the responsibilities of its officers. Lists of faculty members from 1893-1909 and student members from 1893 through those in the Class of 1912 are recorded in a notebook. Subsequent records list the names of YWCA officers. Minutes record the discussions and decisions of the organizations' Executive Committee, Cabinet, Advisory Committee, and other units. Reports describe the annual activities of the members both on and off campus. President's Reports are on file for 1897/1898, 1900/1901-19256/1926, and 1929/1930-1933/1934. These reports sometimes include those of the General Secretary and Treasurer. There are also lists of topics discussed at religious meetings. A Report on the Reorganization of the Religious Life at Mount Holyoke College, 1934-35 by Mary Calwell, General Secretary of the YWCA from 1933-1935, includes information about the religious needs of students as determined through a questionnaire. Programs, Publications, Articles, and Announcements (circa 1898-circa 1935) concern many of the religious and social activities of the organization. These materials include lists of the topics and speakers at prayer meetings and lectures, descriptions of courses of Bible and mission study, and programs for worship services, receptions, and entertainments sponsored by the YWCA A program and article from 1926 concern a YWCA meeting conducted by freshmen students. There are also programs for religious conferences that members attended. Other materials encourage members to provide financial support for the activities of the organization. Budgets (1925-1929, 1930-1931) list the estimated receipts and expenditures of the organization. These documents include the names or individuals and organizations supported by donations from YWCA members. Scrapbooks (1902-1926) primarily contain copies of YWCA publications that are also part of Series 1 and Series 2 of this collection. These materials include President's reports, student handbooks, and programs for course, lectures, and entertainments. There are also examples of stationery and forms used by the organization and several posters, including one from 1917, during World War I, soliciting funds for the Student Friendship War Fund. Photographs (1899-circa 1931) are of YWCA members at Mount Holyoke or off-campus. Most of the photographs taken at the College date from circa 1923-1931 are of officers of the organization or members with settlement house children in Holyoke, Massachusetts. There is also a photograph of members at a conference in Northfield, Massachusetts in June, 1899. The other off-campus photographs date from 1911-circa 1931 and were taken at YWCA summer conferences held at Silver Bay, New York, on Lake George. These materials consist of formal portraits of groups of Mount Holyoke students and snapshots of participants, facilities, and the surrounding countryside. There are also several postcards and some negatives of photographs not represented by other images in the collection.

The Young Women's Christian Association (YWCA) of Mount Holyoke College was established in October, 1893 to encourage the development of Christian character in its members and the prosecution of active Christian work both on and off campus. It was modeled after similar organizations in the United States and Great Britain and affiliated with the national YWCA of the United States. Students, faculty, and alumnae could belong to the organization and members engaged in a wide range of religious, educational, and social activities. On campus, members of the group met for regular Bible study and devotional classes, conducted prayer meetings and services of worship, and sponsored lectures and talks by ministers, missionaries, and social reformers. They collected funds to support the work of missionaries ((particularly alumnae) as well as teachers and social reformers and they worked closely with members of the Student Volunteer Band, another Mount Holyoke organization comprised of students interested in engaging in becoming missionaries. From 1897-1934, the YWCA published a handbook for new students and members organized a variety of student receptions and frolics. In 1917, YWCA members assisted maids who worked at the College by helping them find summer jobs and arranging various forms of entertainment for these women. The organization established a social and industrial issues committee in 1920 to study child labor, disarmament, and other topics and in 1925 set up a Commuter's Club for day students at Mount Holyoke. Off campus, members participated in several kinds of extension work. They visited shut-ins in South Hadley, held religious programs and Sunday school services for town residents, and provided financial help and entertainment to individuals living at the town's poor farm. Students assisted women in Holyoke, Massachusetts (many of them factory employees) by conducting Bible study, English language, sewing, cooking, music, drama and gymnasium classes and providing wholesome forms of amusements at the YWCA facility and the Skinner Coffeehouse, both located in Holyoke. Classes and field trips were also provided for children. In addition, members participated in YWCA conferences held at Silver Bay, New York and elsewhere. The YWCA was the largest and most active student organization at Mount Holyoke from its inception until World War I. Membership declined after the war because of the proliferation of other student organizations at the College and a waning of interest in missionary work and religion on the part of many students and alumnae. In 1934/1935, after conducting an extensive review of religious life at the College, Mount Holyoke's administration replaced the YWCA with a new organization called the Fellowship of Faiths.

From the Record Group: English

Contain constitutions, lists of members, minutes, reports, programs, publications, articles, announcements, budgets, scrapbook and photographs concerning the Mount Holyoke College chapter of the Young Women's Christian Association (YWCA) from its inception in 1893 until 1935, when the organization was replaced by the Fellowship of Faiths. Materials document the religious and social activities of members, including their support of missionaries as well as residents of the South Hadley, Massachusetts poor farm and women and children in Holyoke, Massachusetts. Include documents and photographs taken at the Silver Bay, New York summer conferences for YWCA members.